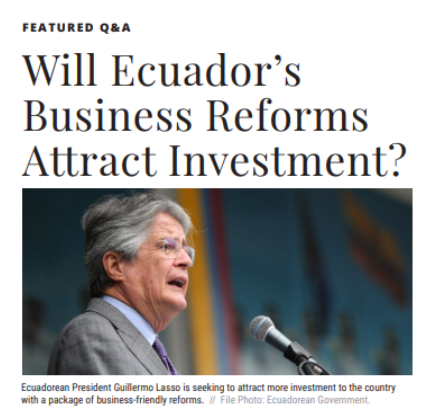 Hoping to draw more foreign investment into the country, Ecuadorean President Guillermo Lasso recently proposed a package of business-friendly legislation to the National Assembly. The measures would create free-trade zones for companies in key sectors, where they would be tax-exempt for 10 years. The package is part of Lasso’s efforts to attract $30 billion in private investment and provide incentives to boost formal employment in the Andean nation. As the president’s party does not hold a majority in the legislature, how likely are the reforms to pass? What would be the consequences for Ecuador’s economy if they don’t? Are the tax exemptions and other incentives enough to attract the amount of investment that Lasso seeks? Would the targeted investments boost formal and high-paying job creation significantly, and what industries would find the incentives the most appealing?

Ramiro Crespo, president and CEO of Analytica Securities: “Much of the bill in theory should be relatively uncontroversial because of its technical nature. Ecuador’s National Assembly is, however, struggling amid an internal dispute over leadership and has an obstructionist track record that puts up real hurdles for the bill to pass. The fast-track bill has at least been admitted into the legislature, and the clock is ticking, because it will go into effect automatically if the assembly fails to review it within 30 days, as had previously happened with Lasso’s tax bill, perhaps the most likely positive scenario. The administration has pinned a fair amount of hope on the bill to obtain investment in public-private partnerships that have had only limited success in the past. It has also designed the future free trade zones on models in Colombia and the Dominican Republic. If it fails to pass, the impact will be more of an opportunity cost weighing on potential growth, rather than one that will slow economic growth. While business response to the law has been favorable, at least some of the measures may be possible to implement even without much support. Much of the $30 billion Lasso wants to attract are from relatively traditional industries, including oil, electricity and mining—the latter being one of the main drivers of foreign investment in recent years. As such, the development of commodity prices in the current volatile times will be the main driver determining whether foreign companies will invest in Ecuador.”

“The proposed legislation, designed to incentivize investment in a myriad of sectors through free trade zones, tax breaks and public-private partnership infrastructure projects, will face an uphill battle. Still, Ecuadoreans are educated and pragmatic. The legislation could pass if those ideologically opposed to free market solutions, and actors who simply don’t want Lasso to succeed, can be overcome. The need is great, and Ecuador has little fiscal room for government-led alternatives. The reality is that Ecuador should be a very attractive investment destination for both Chinese and Western firms, particularly in a post-Covid environment. Compared to most of the rest of the region, it has relatively well-functioning institutions, rule of law, good transportation and other infrastructure, a relatively educated population and limited levels of violence and organized crime. The country is geographically well-positioned as a potential 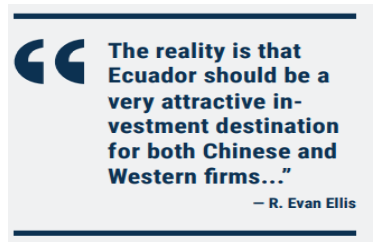 gateway to Asia with the newly expanded deepwater port of Posorja. It has a relatively central location on the Pacific, close to the Southern Cone, and also Panama, and within reasonable distance to the United States. In addition, the business environment of others in the region is worse, with less business-friendly governments and/or organized crime and instability. Even previously attractive alternatives such as Colombia and Brazil may soon elect market-unfriendly governments. Nonetheless, Ecuador still must overcome serious fiscal difficulties, questions about resistance to petroleum and mining projects by affected communities and environmental considerations, the spillover of organized crime and violence from Colombia that is producing insecurity and corruption, and questions about the stability of Lasso’s government.”

: “Ecuador is facing converging headwinds. The economy and people were flattened by the pandemic, the country still has an IMF loan to deal with and China is the nation’s largest lender through crude-for-credit agreements. There is also a legacy of overspending by President Lasso’s predecessors, and he has limited power in the National Assembly. According to the World Economic Forum’s Competitiveness Index, Ecuador ranks 112th out of 141 countries. Mr. Lasso promised to modernize the economy and create two million more formal jobs through an ‘investment 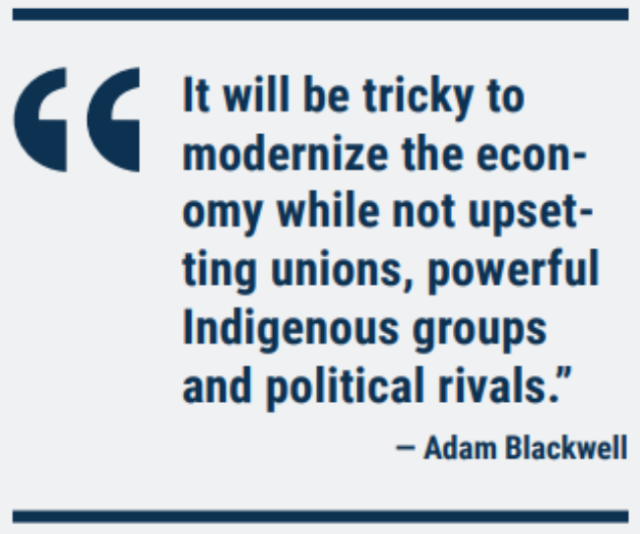 bonanza’ by removing barriers in the key oil, mining, electricity and telecoms sectors, and by creating tax incentives through free trade zones. Last year’s attempt to get a large reform bill through the assembly failed miserably. Last month, the government sent an economic reform package called the ‘Law for the Attraction of Investments, Strengthening of the Stock Market and Digital Transformation’ to the assembly, and that body will have 30 days to consider it. There are reasons to be optimistic: the fiscal deficit should drop to 2 percent of GDP this year, the relationships with the IMF and World Bank are solid, and Lasso was able to fast-track tax reforms on high earners and big corporations. He also fast-tracked a temporary wealth tax, bond prices are up and higher oil prices are helping the economy. It will be tricky to modernize the economy while not upsetting unions, powerful Indigenous groups and political rivals. Political stability isn’t necessarily a strong suit in Ecuador, but Lasso is nonetheless attempting to lure investors despite a legislature controlled by anti-business interests.”

(CEDES): “Before Ecuador considers economic reform, it’s helpful to remember the foreign direct investment that the country received in the 1990s, if the investment is to be long term, inclusive and sustainable. We must also remember that not all foreign investment ends up being beneficial. The capital flows associated with the oil industry may lead to exploration in pristine areas that have unique ecosystems—Yasuní National Park, for example. Ecologically harmful kinds of investment must be avoided, not only because of its effects on the environment and the damage to Indigenous communities, but also because such investments are economically precarious. Ecuador must abandon the quantitative vision of investment in favor of a qualitative vision. This notion is gaining support, not only within the academic community, but also in various business circles. In order to advance along a new economic path, the type of contracts offered to investors should include clauses that protect the environment and local communities. Recreating the investment protection and promotion agreements we saw in the 1990s can be costly. Note the number of claims filed in recent years in the Netherlands against carbon-intensive companies. Obviously, it is impossible to reverse projects that are already in place and avoid international litigation. But the entry of new investment could be prohibited if companies associated with extractive projects do not make an effort to benefit local communities and protect against environmental damage.”